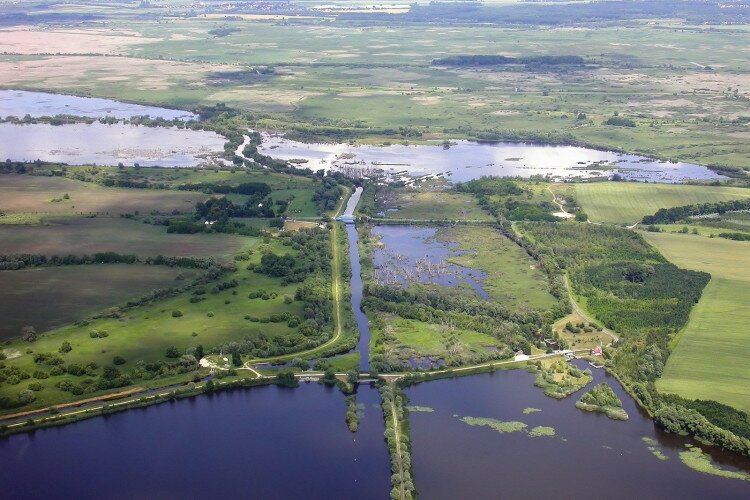 The Kis-Balaton, as a huge wetland habitat is unique in the whole of Europe, which is why it has always been recorded by international nature conservation. Its wonderful world of birds was already famous in the last century; and has survived despite the draining of the marsh started in 1922. It is therefore not surprising that when Hungary joined the Ramsar Convention in 1979, the Kis-Balaton was included in the list of "Wetlands of International Importance as Waterfowl Habitat".

As a result of the reconstruction of the wetlands in the mid 1980s, waterfowl were able to return to formerly deserted habitats. The areas of favourable foraging and nesting conditions have increased by flooding of the Kis-Balaton Water Reservoir. Birds occupied the new places surprisingly fast. Even in the first year tens of thousands of migrating birds arrived to have a rest or to spend the winter here. In addition to 250 species of birds identified so far, we can find several other rare animals and plants here. It is worth to mention the Northern vole, dogfish, pond loach and some rare species of dragonflies among them. Kányavári Island, near Balatonmagyaród, is open to the public, and two watch towers have been built here. With good field glasses and with some luck, visitors may have a good view into the teeming world of the wetlands.

The Vönöczky Schenk Jakab Research Centre is located near Fenékpuszta, where guided tours start with professional guides. Short tours to Diás Isle, István Fekete Memorial Site and Matual Hut start also from here. A PDF file on the ecotourism offer of Kis-Balaton (guided tours, nature photography, interpretive sites, boat tours) can be downloaded from here. An information sheet with detailed information about the guided tours of Kis-Balaton can be downloaded from here.

Entrance fees of the Kis-Balaton House (valid from 1st of April, 2011):

Trips are organized between June 1 and August 31, two times a week:

Kis-Balaton House (Kis-Balaton Ház), which was opened in the year of the Millennium in Zalavár-Vársziget, looks forward to welcoming visitors, renewed and redesigned. Through exhibitions, natural values of the Kis-Balaton Water Protection System (KBWPS), its function for water quality protection of Lake Balaton are represented, as well as historical and ethnographical relations and values of the area are demonstrated.

Entering the entrance hall of the Kis-Balaton House, operation and functions of the KBWPS are displayed by an aerial photo. On the walls, giant photos, tableaux can be seen on this magical region.

The first exhibition room of the ground floor invites you to a journey in time. First you cross a wooden bridge, from which you can see graves opened up by an excavation. This is followed by the inner structure of an agricultural building from the age of Carolings. After this, in a "tower" built by stone-wall, you can get acquainted with the history and life of Zalavár of the Middle Ages. Passing through a paved archway, formation of Kis-Balaton can be followed up on maps. A diorama showing the underwater life of the Kis-Balaton has got a place here too. In the separated review room, films being about water living creatures also enrich the scenery. Coming out of "diving", you can get to know the particular tools and objects of reedy life. Paintings of István Szkok, being full of feeling, bring back the natural world where also "Tüskevár" took place written by, a well-known author of the natural and books for the young, István Fekete. Uncle Matulas stylized hut and showing film pieces, based on the book, raise a monument to the memory of this, too." Under the shroud of darkness" you can familiarize with the lights, sounds and smells of the swamp.

In the other room of this level you can learn more about the Water Protection System. Alluviation of different types of water is demonstrated in glass cylinders on the built stage, through the "peep holes", however, world of water living beings which can be seen only under microscopes appears to view. Visitors can discover the marvelous world of Kis-Balaton as a living picture on their own, sitting in an "anchoring" boat by means of web cameras and by their control, in a boggy-reedy environment that is so characteristic of the area. A charming cartoon made by Ferenc Sajdik gives information on the process of the food chain for both little children and bigger ones.

Also in the projection room you can get to know the wonderful wetland habitats of Kis-Balaton, and other that of our country in addition to special events of the Hungarian water management through motion pictures.

On the first floor the summer and winter wildlife of the marsh is shown with the help of dioramas. A colorful drawing class was furnished for children where they can draw and have a talk about their recent experiences, exhibit their work.

The inner area of Kis-Balaton is closed, which is allowed to be visited only in the frame of an organized excursion in groups. Many photos suggest the unique wildlife of this area throughout the country, but tableaux with texts also give information on this territory in Hungarian, English and German languages.

Some sights of the Small-Balaton region