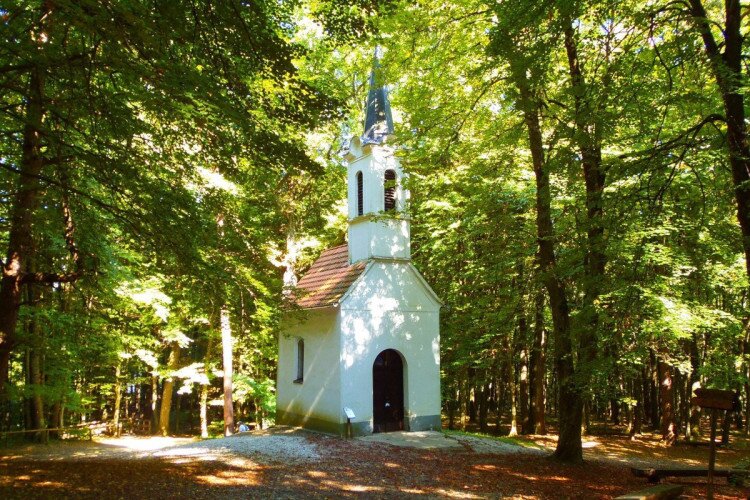 9223 Dobrovnik Strehovci 92.
https://web.archive.org/web/20160317080709/http://www.bukovniskojezero.si/hu/a-szt-vid-kapolna/
Next to the Vid Fountain, the St. Vid Chapel is a trademark of Lake Bakonaki and a favorite excursion destination for visitors. Every year, on June 15, there is the Vid farewell, when thousands of people make pilgrimages to Lake Bakonaki.
St. Vid was born in the Sicilian village of Mazzara del Valla. It is believed that in the time of Emperor Diocletian in 304/305, he was persecuted and tortured for his Christian faith. His cult begins in the 600s, when legends about his life and martyrdom began to circulate, and then the first church dedicated to him was built in Rome. His relics were transported in 756 to the Chapel of St. Denis in Paris. The veneration of St. Vid spread mainly in the Slavic lands, probably because its name resembled the Slavic pagan cult of Svetovid and, in a sense, replaced it.
St. Vid’s churches and chapels were usually built at some height so that St. Vid could “see everything”.

Generous nature has filled the area around Lake Bakonaki with energies that relax, soothe and strengthen people. From ancient times, it was geomancy - the ancient science of beneficial and harmful areas and lines that served as the basis for designating the location of shrines and temples, as they were always built in the area of beneficial radiation. Radiesthesiologists have found that two energy lines (dragon lines) intersect in front of the chapel. Thus, it is no coincidence that where the Chapel of St. Vid is today, there was a church centuries earlier. It is said that there was originally a wooden chapel here, and the brick chapel was made in 1818.

Next → Fairytale park in Nagyrécse